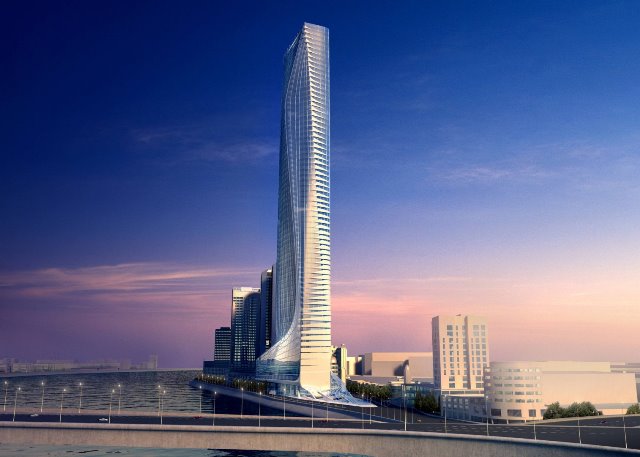 Egypt is constructing what would be,upon completion the tallest building in Africa. The Nile Tower has been designed to be a 70 storey building with fantastic view of the Nile.

The top floors gives one an opportunity to see the pyramids. Designed by the late Architect Zaha Hadid who passed away in 2016, The Nile Tower has been described as one that tells the world that “Egypt is ready for business.”

The top 36 floors will be apartments, the middle 18 floors will be a hotel with approximately 230 keys and the remaining floors below will be reserved for amenities like a casino, night club, spa, health club and shopping area.

The cost of the project has been put at $600 million although the project might cost $150 more, according to the design managers.

The construction sector in Egypt has seen tremendous growth in recent years thanks to strong demand for energy and infrastructure projects, as well as real estate. However, it has not been immune to the short-term economic instability in the aftermath of the currency float, posing challenges amid potential.

Prices of some steel and cement products have doubled as the value of the Egyptian pound flactuates against the US dollar.

“Prices of some steel and cement products have jumped by nearly 100 per cent. This will negatively affect projects and put pressure on some contracting firms, who could be forced out,” Ahmed Al-Zaini, Chairman of the Building Materials Division, Federation of Egyptian Chambers of Commerce, told Zawya Projects in 2017.

But the Ministry of Finance cites construction as one of the most important sectors in terms of its contribution to economic growth in the coming years.

The Nile Tower was mooted a decade ago but was put on hold in the aftermath of the Arab Revolution in 2011 that affected the leadership of Egypt.