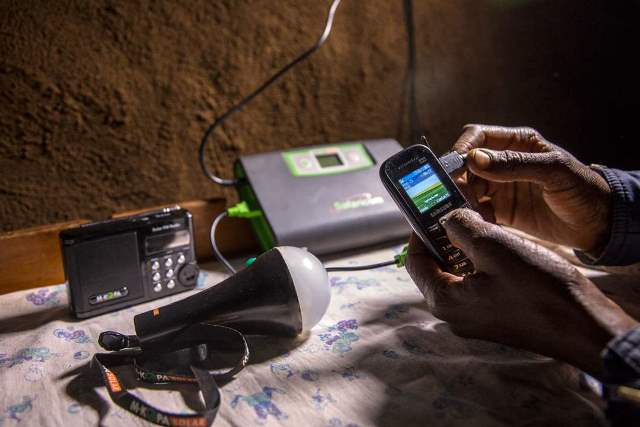 In a “pay-as-you-go” (PAYG) business model, a company essentially rents consumers a solar home system that comes with a battery, a charge controller, a solar panel, LED bulbs and a mobile charger.

Basic systems have enough power to charge phones and lights, and larger ones could power small appliances like radios or TVs. Consumers use basic mobile phones – widespread in East Africa – to make payments on a daily, weekly or monthly basis.

Some of the companies working with this business model in Africa include Azuri Technologies, M-KOPA,M-PAYG, PEG Africa and BBOXX.

The penetration of mobile phones in Africa even to a person living in remote areas have made this system a success.

This coupled with a large population without access to electricity and the development of mobile money transfer platforms have worked to give PAYG solar firms a fertile ground to do business.

The top countries for cumulative non-hydropower renewable capacity were South Africa, Egypt and Kenya.South Africa was the only country worldwide to bring new CSP capacity online in 2017.

But even as Africa boasts a thriving PAYG solar business model, Renewables Global Status 2018 at the same time raises concerns over overall growth in renewable power capacity on the continent.

“Renewable power capacity growth is concentrated in a limited number of countries in Africa,” reads the report in part.

The top countries for cumulative non-hydropower renewable capacity were South Africa, Egypt and Kenya.South Africa was the only country worldwide to bring new CSP capacity online in 2017.

In summary, says the report, the year 2017 was another record-breaking one for renewable energy, characterised by the largest ever increase in renewable power capacity, falling costs, increases in investment and advances in enabling technologies.

But very importantly, this development cannot be said of all countries in the world. Some have made big advances while others are lagging behind.