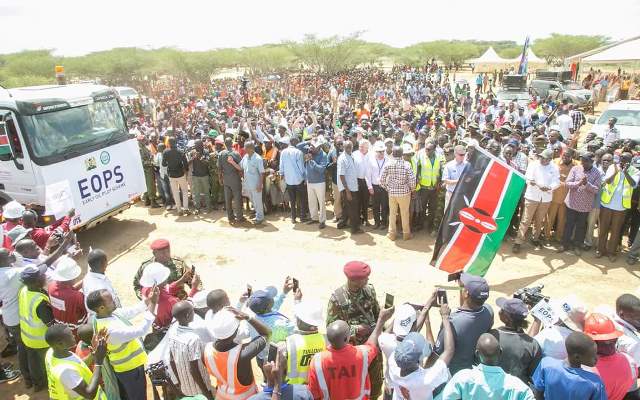 Kenya has released the first consignment of its crude oil from Lokichar in Turkana to Mombasa  for export in what president Uhuru Kenyatta called a “great day for Kenya.”

The move is part of the Early Oil Pilot (EOP) Scheme to be followed by the Full Field Development phase. The crude oil will be stored in Kenya Petroleum Refinery in Mombasa as Kenya looks for viable market.

Speaking during the launch of the programme Sunday, president Kenyatta said that production of oil will help enhance the country’s economy.

“This resource will strengthen the existing economic and commercial partnerships and enhance the opportunities for growth and investments within the country,” he said.

But he also cautioned the country that in some countries in Africa oil has been a catalyst for conflict.

“The negative competition for oil and other natural resources has seen hitherto two peaceful countries go to war. It has seen brothers take up arms again each other as mothers bury their children with no hope for the future,” he said.

In Turkana where oil reserves were discovered, the government is trying to contain insecurity that has been fueled by cattle rustling.

The bandits in the area own firearms which the president ordered they be surrendered or else they face the full force of the law. The area has witnessed bloody attacks in recent years.

Police say the attacks are between the warring Pokot and Turkana communities. Competition for resources such as water and land has also fulled the conflict.

But Kenya hopes that the oil will help boost its economy at a time when it has lined up multi-million dollar projects for construction such as the Lapsset project.

From the proceeds, the government will remain with 75 per cent; 25 per cent will go to the county government and five per cent to the community where the oil fields are located.

British oil exploration firm Tullow Oil has been working on the project in Kenya for the last six years.