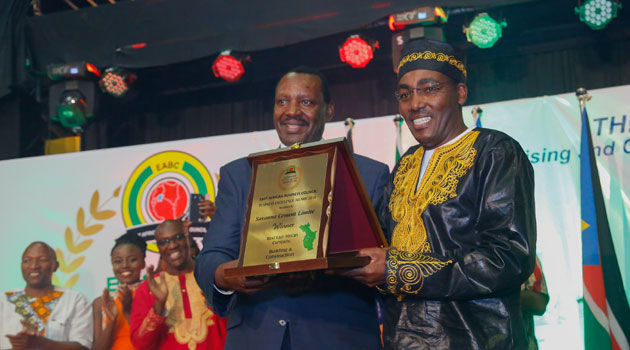 Inspired by its performance against its corporate peers and competitors, Savannah Cement, has confirmed plans to enhance its end to end quality assurance programs to guarantee customer satisfaction.

As part of the firm’s quality assurance strategy, the firm will continue to pursue independent system assessments on its manufacturing, commercial and environmental processes as part of its business development plans.

Speaking when he received several trophies won by the firm at the EABC Business Excellence Awards 2018, at a Gala dinner held on Friday evening, Savannah Cement CEO, Mr. Ronald Ndegwa said the firm’s pursuit of peer reviewed and independent systems audit is part of the firm’s business sustainability strategy.

The AfCFTA signed last Tuesday in Kigali, Rwanda, seeks to create a single continental market for goods and services, with free movement of business persons and investments, and thus pave the way for accelerating the establishment of the Continental Customs Union and the African customs union.

Such opportunities, Ndegwa said, demand the strict adherence to quality standards including external and independent audits such as the EABC Business Excellence Awards Program to provide regional manufacturers with an edge, as intra-Africa trade becomes a reality.

The firm he said, will also maintain focus on professional development platforms including academic workshops as part of its commitment to contribute to the body of knowledge on industrial management and regional economic integration.

“This award has served to inspire us at Savannah Cement to continue pursuing initiatives that can help enhance the integrity of all our processes and products for the benefit of our customers and society at large,” Ndegwa said, adding that, “On behalf of the Board and Management team, these awards are dedicated to all our colleagues and customers in East Africa and beyond for trusting us to cement their assets.”

The Building and Construction Excellence Award Category won by Savannah Cement, seeks to recognise an East African company that has achieved notable success in the sector. The Judges, considered companies that have played a key role in advancing the value of the building and construction economic sector in the EAC region.

As a key supplier to the first and second Standard Gauge Railway (SGR) project, Savannah Cement products were used for concrete works on the Makindu-Kambu section, Emali Section and at the Nairobi Terminus (Syokimau Station) architectural masterpiece.

In the second phase, Savannah Cement Products will also be used at several construction points including the Embulbul Tunnel which is a first of a kind civil engineering masterpiece in sub-Sahara Africa.

Regionally, Savannah Cement has won the trust of the construction industry through high quality products and cement and cement products to landmark projects including;