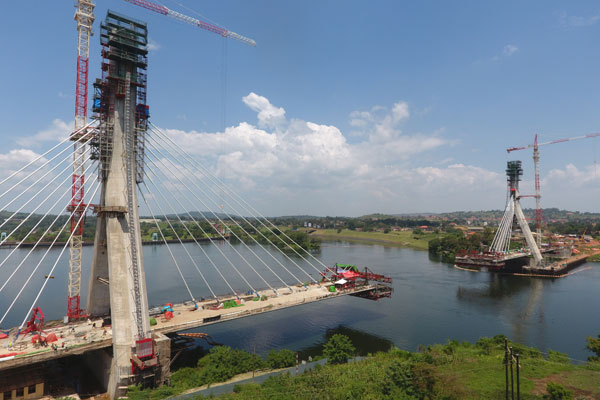 Uganda has received green light to borrow funds from Japanese and European banks to complete work on Nile bridge.

The country’s Parliament has approved government borrowing of up to Sh459 billion to go towards the project.

The new suspension cable Nile Bridge that was originally to cost $130 million, measures 525M Long and, 22.9m wide. The existing bridge along the Nile (Owen Falls Dam) will be decommissioned on completion of works on the New Nile Bridge that will be fitted with diverse design features and technology.

The new Nile bridge project is located about 82km east of Kampala and 500m south of the existing Jinja-Kampala highway. Completion is set for April 2018.

Construction of the project involved creating an artificial island, fracturing through the deep rocks underwater and socketing piles into the hard rocks.

Uganda hopes that new bridge will enhance tourism because of its picturesque location.

It will also contribute to the country’s economic growth by promoting the economic development and integration of Uganda within the surrounding Central African countries and providing guarantees to people and trade movement on the Northern Corridor Route. (NCR)

The new Nile Bridge will ensure safety of the NCR transportation system by relieving traffic loading from the existing deteriorating Nalubaale bridge structure which was built in 1950.

The bridge will be the first of its kind in east Africa and will have a system and gadgets that will monitor the temperature, forces and stretches of the bridge cables.