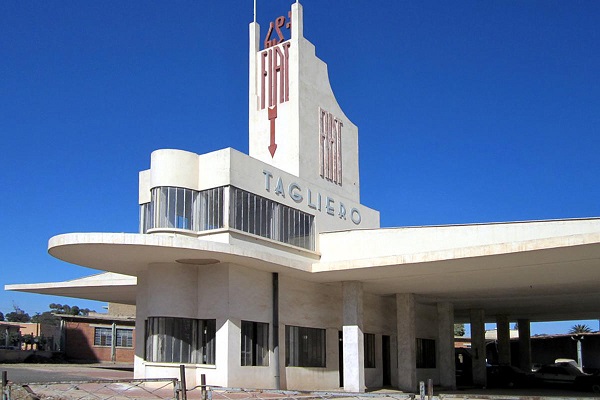 Located on a highland plateau at the centre of Eritrea, Asmara, a Modernist city of Africa is the capital of the country and is an exceptionally well-preserved example of a colonial planned city, which resulted from the subsequent phases of planning between 1893 and 1941, under the Italian colonial occupation.

Altogether, Asmara’s urban-scape outstandingly conveys how colonial planning, based on functional and racial segregation principles, was applied and adapted to the local geographical conditions to achieve symbolic meaning and functional requirements.

In the late 19th century, after becoming the capital of the Italian colony, Asmara grew from a small village to a sizable town by the 1920s.

The city became a kind of experimental ground for modern architecture and urban planning designs. This is evident in the numerous types of buildings, which were constructed in various styles including Eclectic, Neo-Classical, Futurist, Monumentalist, Rationalist and Modernist.

The town has come to be associated with the struggle of the Eritrean people for self-determination, which was pursued whilst embracing the tangible, yet exceptional, evidence of their colonial past.

Asmara’s urban character and strong urban form exhibits a human scale in the relationship between buildings, streets, open spaces, and related activities adapted to the local conditions, which embodies both colonial and post-colonial African life, with its public spaces, mixed-use fabric and place-based material culture.

These spaces and use patterns also bear witness to interchange and cultural assimilation of successive encounters with different cultures as well as to the role played by Asmara in building a collective identity that was later instrumental in motivating early efforts for its preservation.

Asmara’s urban layout with its different patterns associated to the planning phases, illustrates the adaptation of the modern urban planning and architectural models to local cultural and geographical conditions.

A Modernist African City, represents an outstanding example of the transposition and materialization of ideas about planning in an African context and were used for functional and segregation purposes.

The adaptation to the local context is reflected in the urban layout and functional zoning, and in the architectural forms, which, although expressing a modernist and rationalist idiom, and exploiting modern materials and techniques, also relied on and borrowed heavily from local morphologies, construction methods, materials, skills and labour.

Asmara’s creation and development contributed significantly to Eritrea’s particular response to the tangible legacies of its colonial past. Despite the evidence of its colonial imprint, Asmara has been incorporated into the Eritrean identity, acquiring important meaning during the struggle for self-determination that motivated early efforts for its protection.

The architecture of Asmara complements the plan and forms a coherent whole, although reflecting eclecticism and rationalist idioms, and is one of the most complete and intact collections of modernist/rationalist architecture in the world.

Eritrea’s capital city Asmara was inscribed on the UNESCO World Heritage List in 2017 as “an exceptional example of early modernist urbanism from the beginning of the 20th century and its adaptation to an African context.