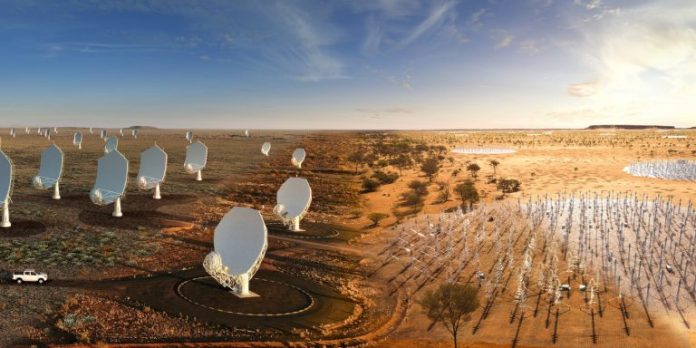 Just under six months after the SKA Observatory Council approved the start of construction of the SKA telescopes, two more contracts have crossed the Director-General’s desk for signature last week. This brings the total number of contracts signed so far to 27.

Worth approximately €90 million in total, the contracts have been awarded to all seven current SKAO members, namely Australia, China, Italy, the Netherlands, Portugal, South Africa, and the United Kingdom. The majority of awards have been for software development with additional early contract awards for professional services contracts. These expand the SKAO’s own engineering and management capabilities ahead of further construction work, as well as procuring early components and subsystems needed for the first arrays.

So, what’s been happening since construction was approved? And how does it all work? Let’s take a deep dive.

First off, teams are building on years and years of pre-construction design activity by partners all around the world that culminated in the production of the SKA Phase 1 Construction Proposal earlier this year. This thorough document of 256 pages stipulated the design baseline for the SKA telescopes, the work packages and construction milestones, as well as how member countries would benefit from their investment in the project by way of fair work return.

Building on those years of preparatory work and substantial financial investment in the design of the SKA, countries expressed interest in supplying specific elements in which they had expertise such as the antennas, the supercomputers, the networks, software, etc. This resulted in a model where most contracts would be allocated to specific member countries, while unallocated contracts would be offered to all members.

The result: over 60 “Tier 1” contracts placed by the SKAO. The vast majority are cash where the SKAO is the client, while a few are in-kind, or paid for directly by countries. Below them sit “Tier 2” contracts, placed between Tier 1 contractors and sub-contractors to deliver specific elements of the contract.

“There’s been a huge amount of work by teams within the Observatory and across the partnership over time which has accelerated in the recent past to ensure industry-readiness as soon as we’d hit the go button,” explains the SKAO’s Head of Procurement Services, Ian Hastings (read our piece on procurement preparations ramping up in December 2020 here).

The “go button” Ian talks about was the approval of construction by the SKAO Council at the end of June 2021. This thrusted the SKA’s procurement process into its second stage: purchasing.

Most contracts to be awarded in first year

The first Tier 1 contracts were signed within a week of construction approval, thanks to the efforts of the teams upstream.

“Most of our construction contracts must be awarded in the first year to meet our ambitious construction schedule. And of course, going out to tender is where our procurement plans are tested ‘in real life’ for the first time,” says the SKAO’s Head of Project Management Group, Andrea Casson. “As a team, we have great momentum now, and the learning from these first contracts is being fed into the plans for the upcoming ones in a dynamic way.”

To ensure local small and medium enterprises around the telescope sites benefit from work, the SKAO has unbundled some of its larger infrastructure contracts, making them more accessible to local companies. The Observatory was keen to get this right in order to make sure the construction of the SKA telescopes also benefits local communities and local industry around the sites, in line with its vision.

Another way the Observatory ensures benefits trickle down to the local economy is with assessment criteria that reward bids outlining plans to subcontract to local companies, especially ones benefiting previously disadvantaged groups.

The SKAO relies on the fourth version of a suite of standard contracts developed over the last 30 years called “New Engineering Contracts”. One advantage of using NEC4 is that the contracts are written in “plain English”, says Ian. The second is that they are process-driven.

“The contracts are living breathing things with risk registers and early warnings and compensation events,” he says. “The idea behind NEC4 is that you minimise the number of disputes by resolving your issues during the performance of the contract. They are by their nature collaborative contracts and the SKA is a collaborative project, so it’s an ideal fit.”

Adversity is the biggest driver of innovation

No matter the amount of planning, no complex international project will go completely smoothly, of course.

“Every large-scale infrastructure project faces threats to budget, schedule, and performance,” says Joe McMullin, the SKAO’s Programme Director and Deputy Director-General. “We work to minimise those through our risk management and through the Project Execution Plan.”

While no one could have predicted the COVID-19 pandemic, the SKAO was able to quickly adjust its plans ahead of the start of construction to take into account as much as possible the effects of the pandemic and other challenges on the global economy.

In the context of a global shortage of semiconductors and shipping issues, the SKAO is working to control its own supply chain. As an example, the Observatory is bulk-buying programmable circuit boards it knows it will need to then provide them to contractors as raw material when they’ll need to assemble them.

And with the cost of containers skyrocketing, the Observatory is also looking at taking charge of shipping to its sites in Australia and South Africa. This could help the organisation lower its overall global maritime insurance policy by bundling all the shipping together rather than leaving it to each supplier. It would also allow the SKAO to better control its supply chain and ensure components arrive on site only when they are needed, thereby avoiding unnecessary storage charges and logistics headaches on site.

However, given the current global uncertainties, the Observatory remains cautious in its outlook.

“While we’ve managed to overcome several challenges, some risks are clearly beyond our control, like a pandemic. Like every other business, we are impacted by the knock-on effects of such events and must adjust our schedule and delivery accordingly,” notes Joe McMullin.

Scrutiny at every step

Each competitive contract that the Observatory commits starts by informing Industry Liaison Officers (ILOs) for each country where an opportunity is coming up. In many cases, these ILOs have been working for years, engaging with, and motivating industry and building networks of potential suppliers. Their job is to provide information to suppliers in their respective country regarding business opportunities with the SKAO. The Observatory then conducts a market survey in the allocated country to gauge interest from industry.

Sometimes, the SKAO will award a contract without going to the market, known as a single-source contract. This happens where extremely specialised skills are needed – such as in software – or where a company or partner has been working on a very specific aspect of the design of the SKA for years and has thus secured unique knowledge. Doing so ensures that the SKAO retains expertise and saves valuable time.

But regardless of whether the procurement is competitively or single sourced, every company interested in tendering must be prequalified. This is a type of due diligence where the Observatory verifies that the company would be able to carry out the work successfully. It includes checking whether the company has delivered projects of a similar size and complexity before.

Companies that pass this checkpoint are then invited to tender. They receive a tender pack listing the SKAO’s requirements, including for example that the successful bidder must subcontract to other member countries. These Tier 2 contracts help to maintain the fair work return arrangements agreed with member countries.

Once the tender window closes, the responses are scrutinised by a panel made up of, at a minimum, the contract’s project manager, a procurement representative, a technical expert, and someone from mission assurance. The tender evaluation committee identifies the bidder that best fulfils the tender criteria and the recommendation then gets presented to a subcommittee of the SKAO’s Finance Committee, made up of representatives of the SKAO’s member countries.

“Attending meetings of the subcommittee is really remarkable, and you can really see the Observatory acting as an Observatory,” said Joe. “All of our teams are represented and the panel is there to challenge us on the process and make sure we’ve followed the rules set out in our agreed procurement plan. Such a thorough and transparent process is absolutely critical in an environment like ours where we’re spending taxpayers’ money.”

Finally, when the tender subcommittee endorses a contract, it goes to the Director-General for inking.

Hitting the ground on site

And so, as 2021 closes and six months have passed since the start of construction activities, the SKA Observatory has already allocated more than two dozen major contracts, learning and adapting along the way to meet local expectations and factor in global challenges.

With such great momentum, what can we expect next year?

2022 will see major infrastructure work being allocated and starting at the two telescope sites. Five big infrastructure contracts – worth together over 100 million euros – are currently open for tenders. Many of these are to ensure that things such as accommodation, power, access roads, emergency airstrips as well as radio and fibre optical communications are in place for the work on site to begin.

By the end of 2022, the Observatory will have awarded approximately 85% of its Tier 1 contracts, and committed more than 500 million euros of construction funding. Just over the horizon, in 2024, the very first array assembly milestone – deploying four dish systems in South Africa and over 1,000 low frequency antennas in Western Australia – will loom, with further milestones beyond. The excitement within the Observatory and its partners is palpable.