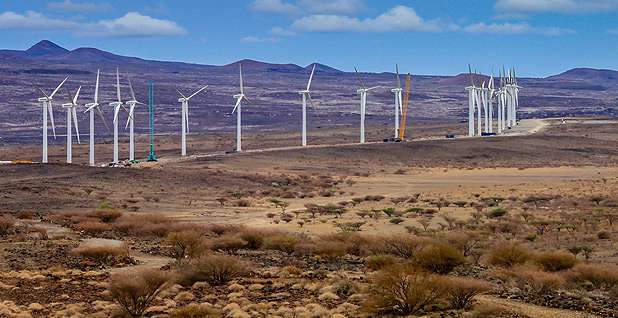 Africa’s largest wind power farm is set for launch in Kenya following the completion of a high voltage power line that will help evacuate electricity from the farm to the centre of the country.

Kenya’s energy minister Charles Keter announced that the Lake Turkana Wind Power project will be launched in December this year.

“What is left now is the official commissioning for the power plant and the transmission line,” Energy Minister Charles Keter said on Tuesday during a site tour of the transmission station that will receive the electricity.

The 266-mile (428km), 400-kilovolt power line is critical to evacuate electricity from the Lake Turkana Wind Power plant in Loyangalani to Suswa at the centre of the country.

The deadline for completion of the power line was August 31 and failure to adhere to the deadline would have attracted a 1 billion penalty. A consortium of Chinese firms has been working tirelessly to deliver the project on time.

“This project will be connected to the grid by December and we expect to see the cost of power coming down,” said the minister.

The power line was due for completion by end of 2016 but stalled due to a mix of factors including financial problems that Isolux Corsan – the initial contractor – experienced as well as lengthy land acquisition procedures.

The Kenya Electricity Transmission Company (Ketraco) terminated Isolux Corsan’s contract last year and gave the job to a consortium made up of NARI Group Corporation and Power China Guizhou Engineering Company (PCGE), which committed to handing the project over to Ketraco by August 31 this year.

Kenya hopes that the Turkana wind farm will help to satisfy it rising demand of energy as it seeks to become an industrial country by the year 2030.