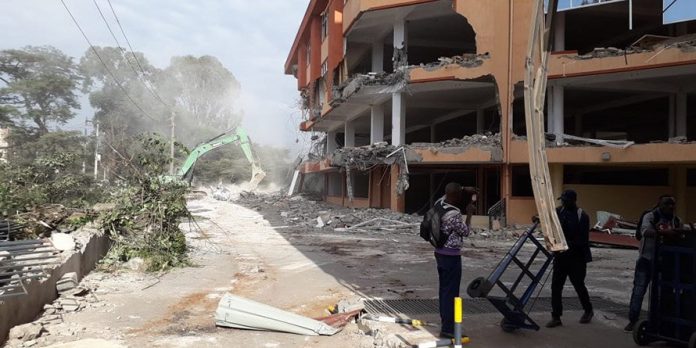 A huge mall that is built on riparian land has been demolished. The Ksh 1 billion Southend Mall was flattened Wednesday morning spearheaded by a multi-agency task force comprising of environmental body NEMA, road agency KURA and Nairobi County government.

The plan according to the joint task force is to reclaim  grabbed wetlands in the capital Nairobi.

A few months ago Nairobi experienced intense flooding that was blamed partly on building on rivers that obstructs flow of water.

The South End Mall in  particular was blamed for flooding in Nairobi West, South C and the entire Lang’ata area. The national environment watchdog and residents complained that the building obstructs the flow of the Mutuini-Ngong River causing flooding during the rainy season.

In a wider plan to avoid flooding in the future Nema said that illegal structures in Nairobi  especially those located on river valleys will be demolished.

Already, a Java House outlet and Shell Fuel station in Kileleshwa, has been flattened to reclaim riparian land in Nairobi.