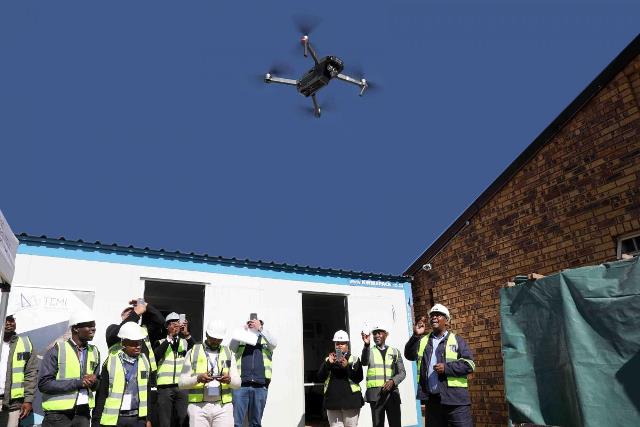 He said that the move to use drones to monitor construction projects in Gauteng was informed by the advice he received from technology experts.

“I met them and expressed the frustrations I get in regards to projects monitoring.I wanted them to help me get real time information on what is happening on construction sites,” said Mr Mamabolo.

He was referring to an extension of a local clinic whose completion has been delayed. Construction of the Phillip Moyo Community Health Centre located east of Johannesburg began in July 2017 and was supposed take 12 months to complete.

The Department of Infrastructure Development has 340 projects in the pipeline over the next 3 years, mainly in education and health, with a total budget of R4.5bn.

Gauteng fears that unless drastic measures are taken to monitor construction projects in the province, some projects run over time and budget.

And due to lack of sufficient data, dishonest contractors and suppliers can collude to undermine projects delivery thus increasing cost of projects, explains Mr Mamabolo.

“The reason why our country is not getting value for money from massive, massive investments we have made is because the data for decision making, for trouble shooting, for intervention, for good decision making – the data is not available”

Costing approximately 20 000 Rands and weighing 700g, the drone has the ability to fly out to a distance of 7km, with obstacle sensors.

Gauteng Infrastructure Development has started training interns to operate them. Officials reckon that the province would need 5 drones to adequately monitor construction projects in the area.