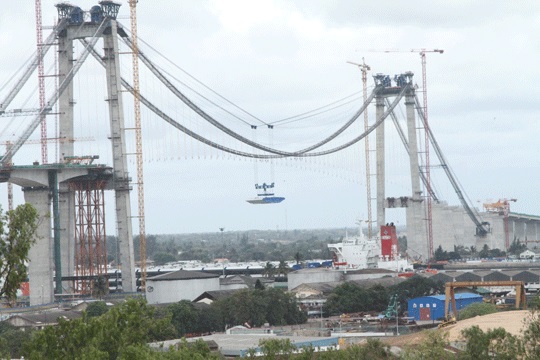 Construction of Africa’s longest suspension bridge in Mozambique is now set to be completed in June this year, a firm implementing the project Maputo Sul has announced.

The Maputo-Catembe bridge which is being constructed by Chinese Road and Bridge Corporation is 95 per cent complete, says Maputo Sul’s supervisor for quality control in the project, Basilio Dzunga.

The project has been postponed in many occasions mainly due to delay in arrival of construction material.

The 3km bridge aims to link the capital Maputo with the small and picturesque town of Catembe on the southern edge of Maputo Bay. The bridge will cut the journey times by eliminating the need to drive around the bay or use some of the ageing ferry services.

It is also expected to create significant employment and growth and boost international trade.

This project was budgeted at US$725 million, and its financing was secured through a loan from Mozambique from the Export-Import Bank (ExIm) of China.

In October last year, China Road and Bridge Corporation placed the first module of the 57 that will make up the main deck of the bridge.

The deck, which covers a 600-metre suspension span, is estimated to weigh more than 7,000 tonnes. Each module is 12 metres wide, 26 metres long and 3 metres thick.

he project is divided into three parts – the first section from Maputo to Katembe, over 35 kilometres; the second section comprising Katembe-Ponta de Ouro (109 kilometres) and includes the repair/construction of roads between Katembe/Bela Vista and Bela Vista/South Africa and the third section of 63 kilometres covering the repair of the Bela Vista/Boane road.

The bridge is part of the larger project to build the 209 km Maputo/Ponta de Ouro road.