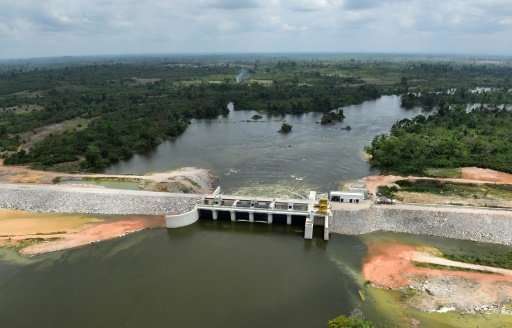 Cote d’Ivoire on Thursday inaugurated a Chinese-built hydropower dam, the largest of its kind in the West African country.

The 4.5-km-long Soubre hydroelectric power station, at Naoua Falls on the Sassandra River, with an installed capacity of 275 megawatts (MW), is expected to increase hydro power in Cote d’Ivoire’s energy mix and cement the country’s status as a key power producer and supplier in West Africa.

The Soubre project, dormant for several decades due to lack of funding, was launched in February 2013 with funding from China.

One of Soubre’s four total generator units started generating electricity in May, about eight months ahead of schedule, according to the builder Sinohydro Corporation Limited, which is under PowerChina.

“The Government of Cote d’Ivoire is very satisfied with the quality and speed of the construction of the Soubre hydroelectric dam,” Alassane Ouattara, President of Cote d’Ivoire, said at the inauguration ceremony held in front of the dam.

The president said Cote d’Ivoire is willing to have more cooperation with China.

Hailing it as “one of the landmark achievements of cooperation between China and Cote d’Ivoire,” Wang Jun, Charge d’affaires of the Chinese Embassy in Cote d’Ivoire, noted in his speech that the hydro station has helped deepen the bilateral economic and trade cooperation, especially in the areas of energy and hydroelectricity.

“Soubre dam is of high quality and built within a shorter period than schedule. I’ve been impressed by both the determination and flexibility shown in the Chinese builder’s work,” said Teyssiaux Jean, an engineer with Tractebel Engineering, a French company in charge of quality supervision over Soubre’s construction.

The cost of the Soubre hydropower dam is about 572 million U.S. dollars, of which 85 percent is financed by the Export-Import Bank of China and 15 percent by Cote d’Ivoire.

Cote d’Ivoire has the ambition to push its power production capacity to 4,000 MW by 2020. Thursday’s inauguration of Soubre adds to the country’s existing capacity of around 2,000 MW.

“With Soubre dam, we’re on course to meet the target of 4,000 MW by 2020,” said Thierry Tanoh, energy minister of Cote d’Ivoire, noting that the dam contributes greatly to the improvement of people’s livelihoods.

Following the Soubre inauguration, a foundation laying ceremony was held at the same site for the 112-MW Gribo-Popoli project, a dam 15 km downstream of Soubre, to be built also by Sinohydro.