The ongoing revamp of the iconic Johannesburg’s Park Station is expected to enhance the image of the facility and revolutionise transport in Souther Africa Johannesburg Transport MMC‚ Nonhlanhla Makhuba has hinted.

Makhuba said that total of R400-million will be spent to revamp the Park Station.

The Kazerne transport facility will integrate local and regional transport and will be used as a rank for and to host long-distance and cross-border taxis and buses travelling from Johannesburg to other SADC countries.

The facilities will also see the construction of new Rea Vaya routes to areas currently not serviced by Johannesburg’s rapid bus transport system.

Residents of Alexandra‚ Wynberg‚ Orange Grove and Sandton will have nearly 150 dedicated Rea Vaya buses on their streets by October next year.

Johannesburg Transport MMC‚ Nonhlanhla Makhuba‚ said construction of the Kazerne transport hub‚ which began in 2014‚ was due to be completed by June next year.

She said it would minimise the distance pedestrians had to walk to reach different forms of transport.

“We are addressing the ill effects of the past and implementing programmes that link residents to economic opportunities and bring quality public transport services closer to the people.”

She said the facility would ease the plight of the poor.

Makhuba said by September there would be a dedicated public transport loop around the Sandton business district.

“This should make it easier for commuters using buses and minibus taxis to end or start their journey in Sandton.”

She said the construction of the new Rea Vaya routes would create both temporary and permanent jobs. 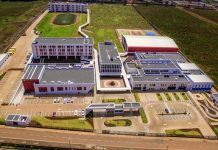